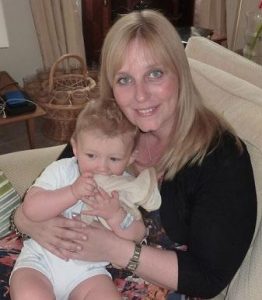 I come from the city of Nottingham in the UK and have lived in Germany with my British husband and two children since 2002. I have worked in a variety of childcare settings in a number of countries including England, Australia, Spain, Germany and the Canary Islands. I have a UK diploma (NNEB) DCE in childcare and education and over 23 years experience working with children from 0-15 years old in a comprehensive range of settings including private day care, special needs schools, play schemes, infant and primary schools, hospitals, nursery schools and holiday programmes.

I also hold the TEFL (Teaching English as a Foreign Language) qualification, and a diploma for teaching children and adults with dyslexia.

I am English and have lived in Germany with my German husband for 27yrs. I have two children, Grace 21yrs. and Ruben 18yrs.
I trained in childcare at the residential Princess Christian College in Manchester during which I
worked with babies and children from 10wks. to 5yrs. including special needs, maternity and local nurseries.
I have worked as a Nanny in London, Paris, Brussels, Australia and Germany.
I also worked as part of a volunteer team for 6mths in a Romanian Orphanage after the fall of Cauecescu.
While working in Wiesbaden I helped set up an International Playgroup to support mothers in the local area.
After travelling with my husband’s job we moved from Mainz to Hessen in 2007 and built our house in Alsbach.
Following a few fun years as an active parent rep and volunteer in many fundraising projects I eventually jumped
back into childcare and my job at Lollipop House is a wonderful and rewarding combination of caring for children
and helping them develop through play, fun and language.

I come from Glasgow, Scotland in the UK. I have lived in Germany since 2010 with my husband and 2 daughters.  I have also lived in China and Dubai.

After university, I worked in various health care settings as a registered general nurse, later specialising in Occupational Health.

I hold a Teaching English as a Foreign Language (TEFL) qualification and a Special Educational Needs & Disability (SEND) Diploma. I am presently undertaking a Childcare and Early Learning Diploma.

I joined the Lollipop House team in 2017 and have experience working with children 1-8 years old.

I am South African and my husband is British. We have two children in Secondary School, Kayleigh and Braden. We also have a little dog Bella who we spend many hours in the forest with.

I had previously worked for a kindergarten in South Africa. I learnt extensively about childcare and child development during this time. I went to the UK for a couple of years to work and travel. Upon my return  I started studying for my degree in Forensic Investigation and worked at the Special Investigating Unit as a Forensic Investigator for many years. During these years I also raised my babies applying all the knowledge I had acquired previously at the kindergarten. I also devoured childcare books in an effort to mould my children into perfect little humans.

We moved to Germany from South Africa in July 2014.  Our son, Braden attended the preschool class at Lollipop House when he was little too! I joined the Lollipop House team in late 2021 and have loved working in this very happy and nurturing environment.